Two women, one in the present day and one in 1942, each hope for a brighter future. But they’ll both have to battle through their darkest days to reach it.

“Today. “With the grand opening of her new gallery and a fairytale wedding months away, Sera James appears to have a charmed life. But in an instant, the prospect of a devastating legal battle surrounding her fiance threatens to tear her dreams apart. Sera and William rush to marry and are thrust into a world of doubt and fear as they defend charges that could separate them for life.

“June 1942. “After surviving the Blitz bombings that left many Londoners with shattered lives, Kaja Makovsky prayed for the war to end so she could return home to Prague. But despite the horrors of war, the gifted journalist never expected to see a headline screaming the extermination of Jews in work camps. Half-Jewish with her family in danger, Kaja has no choice but to risk everything to get her family out of Prague. But with the clutches of evil all around, her escape plan crumbles into deportation, and Kaja finds herself in a new reality as the art teacher to the children of Terezin.

Bound by a story of hope and the survival of one little girl, both Sera and Kaja will fight to protect all they hold dear.

Just as certain stories, movies, or actors retain popularity within film, artistry, or music, publishing retains certain authors that seem to one day rise from obscurity with powerful messages for audiences. The genre of World War Two fiction has long captured readers’ attention both in the ABA and CBA markets, with 2014/2015 being especially strong years for the market. Kristy Cambron is one such author who has worked quietly and consistently to mark her place in publishing. While she is a writer of Regency stories as well World War Two fiction, it is her series of hidden art during the Holocaust that denotes her talent for writing beautiful, emotive stories.

A Sparrow in Terezin, Cambron’s second novel in the Hidden Masterpiece series, is a novel bound for greatness. Much like it’s predecessor, The Butterfly and the Violin, Cambron’s sophomore story with dual lines that share lessons of faith, hope, and love is sure to touch readers’ hearts because Cambron is emotive. She infuses every line of her novel with the pain and loss of those who suffered during the Holocaust to the joy and hope of those who survived. Cambron uses various literary tools to draw readers deeply into A Sparrow in Terezin. Readers’ emotions will be flexed as she uses vivid imagery to paint the scenes from a bombed London road to a Nazi ghetto. Cambron’s prose is so evocative with the authenticity of Holocaust experiences that it is a wonder the author did not walk through Terezin herself.

The dual storylines of A Sparrow in Terezin serve to teach readers that the fears and joys we experience today are just the same as those the Greatest Generation walked through sixty-some years ago. Kaja and Liam, from the Terezin side of the story, demonstrate the depths that love of any kind can push a person to act heroically during trying times. Sera and William, from the present side of the story, fight for honesty and trust during a time in their marriage that has every chance of breaking despite both characters’ efforts to save the relationship. The storyline of the Holocaust—the art, the relationship between Kaja and Liam, the historical facts that Cambron weaves into the story—is the strongest aspect of A Sparrow in Terezin. Her interest in and love of World War Two propels everything in this story; from the dialog with its 1940’s twists and Prague dialect, to the rich details of setting and place, readers of World War Two fiction will grasp at all chances Cambron offers her readers to go back in time. Those following this novel after Cambron’s first release will also thoroughly enjoy picking up on Will and Sera’s story from The Butterfly and the Violin. While the contemporary storyline is not as poignant as its historical sibling, Will and Sera’s story is sweet and refreshing with its lessons of trust and loyalty.

A Sparrow in Terezin represents some of what is best about CBA fiction: God’s timing always works for the good of those who love him; that even in the darkest of times He is with us; that beauty can always be found when someone has hope in Jesus Christ; and that love sees people through the best and worst of times. Cambron symbolizes God’s time and care for His children through a story of a clock tower and sparrows. In one of the most beautifully written tales told through the eyes of a child, A Sparrow in Terezin continually returns to Kaja’s fascination with an old clock tower that tells time through God’s creatures and features.

Time will tell how many to-be-read and favorite lists A Sparrow in Terezin lands upon; there is no doubt, though, that every reader of Cambron’s sophomore novel will be touched limitlessly by this novel. 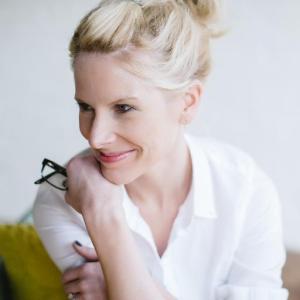 Kristy Cambron fancies life as a vintage-inspired storyteller. Her debut historical novel, The Butterfly and the Violin (Thomas Nelson, 2014), was named to Library Journal Reviews’ Best Books of 2014, Family Fiction’s Top Ten Novels of 2014, and received nominations for both the RT Reviewers’ Choice Awards Best Inspirational Novel of 2014 and 2015 INSPY Awards for Best Debut Novel. Her second novel, A Sparrow in Terezin (Thomas Nelson, April 2015), was named Library Journal Reviews’ Pick of the Month (Christian Fiction) for February 2015 and a Top Pick from RT Book Reviews for April 2015.

FIND KRISTY at the following links: