Heart on the Line (Ladies of Harper’s Station #2)

Witemeyer Returns with Her Trademark Blend of Adventure, Romance, and Humor

Grace Mallory is tired of running, of hiding. But when an old friend sends an after-hours telegraph transmission warning Grace that the man who has hunted her for nearly a year has discovered her location, she fears she has no choice. She can’t let the villain she believes responsible for her father’s death release his wrath in Harper’s Station, the town that has sheltered her and blessed her with the dearest friends she’s ever known.

Amos Bledsoe prefers bicycles to horses and private conversations over the telegraph wire to social gatherings with young ladies who see him as nothing more than an oddity. His telegraph companion, the mysterious Miss G, listens eagerly to his ramblings every night and delights him with tales all her own. For months, their friendship–dare he believe, courtship?–has fed his hope that he has finally found the woman God intended for him. Yet when he takes the next step to meet her in person, he discovers her life is in peril, and Amos must decide if he can shed the cocoon of his quiet nature to become the hero Grace requires.

I absolutely loved Heart on the Line. I’ve enjoyed each of Witemeyer’s books I’ve read thus far, but this novel far exceeded my expectations so much so that I didn’t know what to do in regards to reading once I finished this story. My favorite novel of 2017, this book also has earned a spot on my “forever favorites” list. I felt an immediate connection with our heroine, Grace, and our hero, Amos–oh, how I wish more novels has heroes like this quirky, charming, academic, and brave man. Not only was the story filled with characters who are admirable, unique, funny, and original, Heart on the Line‘s plot is quirky and faith-filled just as is its hero. While historicals set in other genres tend to be my go-to books, novels like Heart on the Line continue to prove to me why reading outside our typical genres is one of the best things we can do. Witemeyer is the perfect example of how authors who are talented with their writing and creative with their stories open up new worlds for their readers. 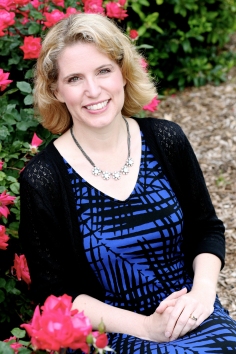 Stone Hammond is the best tracker in Texas. He never comes home empty-handed. So when a wealthy railroad investor hires him to find his abducted granddaughter, Stone eagerly accepts.

Charlotte Atherton, former headmistress of Sullivan’s Academy for Exceptional Youths, will do anything to keep her charges safe, especially the little girl entrusted to her care after her mother’s death. Charlotte promised Lily’s mother she’d keep the girl away from her unscrupulous grandfather, and nothing will stop Charlotte from fulfilling that pledge. Not even the handsome bounty hunter with surprisingly honest eyes who comes looking for them.

When the teacher he’s after produces documentation that shows she’s the little girl’s legal guardian, Stone must reevaluate everything he’s been led to believe. Is Miss Atherton villain or victim? She acts more like a loving mother than an abductress, and the children in her care clearly adore her. Should Stone break his perfect record?

Then a new danger threatens, and Charlotte is forced to trust the man sent to destroy her. Stone becomes determined to protect what he once sought to tear apart. Besides, he’s ready to start a new pursuit: winning Charlotte’s heart.

A tumbleweed blows across dry land, a reddish-brown first swirling around a deserted town long-forgotten after two dueling cowboys fought outside the local tavern. Late 1800s Texas—a setting unlike any other, and one that is enjoyed by many readers of Christian fiction. Just not myself…at least until now.

I’ve never felt drawn to the 1800s Western genre like so many of my fellow readers are. This setting just did not appeal me; to be honest, imagining a story set in this time period still doesn’t make my heart beat in anticipation as it does when I find a new World War Two or Regency novel sitting on a shelf at Barnes and Noble. But before this month I had never read a Karen Witemeyer novel, and just as an unexpected dish can call us to new flavors or tastes, I have found that Witemeyer just might have made a Western fan of me yet after finishing A Worthy Pursuit. If the mark of a strong writer isn’t winning over fans to a new plot line or genre, I don’t know what else is.

A Worthy Pursuit contains elements of what I expected of a Western novel, such as gun-fights, ranchers, and dialect reminiscent of language spoken in John Wayne movies; however, there was much more to this novel than I expected of one set in 1800s Texas, such as a deep character growth, family drama, and a romance based on faith and trust. The elements of a Western-set novel that I imagined I would not care for—those gun-fights, cowboys, and dialect so far from own Mid-Atlantic lilt—bothered me very little because Witemeyer is a wordsmith who uses the deeper elements of point-of-view, metaphor, relationships, and character development to develop her stories. Instead of mentally correcting Stone Hammond every time he left off his “g’s”, I focused more on his motivations and character as he carried off his bounty-hunting duties. Witemeyer knows writing: dialect should be used few and far between, and only to enhance the scene. I did not drown in Texan language, and that alone immersed me into the story and impressed me with Witemeyer’s writing skills.

A Worthy Pursuit excelled in every level of what makes a great story: endearing and believable characters chase after dreams, battle insecurities and villains, and follow their faith through internal and external challenges. Charlotte and Stone—the heroine and hero, respectively—both grabbed my attention from the first few pages of the novel. I thoroughly enjoyed Charlotte’s journey from nervous schoolmarm to a woman in love. Her mama-bear protectiveness of her three children drove the story, and Witemeyer’s choice of background for her heroine was unique, believable, and compelling. Much to my surprise, I also found myself rooting for Stone much sooner and deeper than I expected. This bounty hunter turned my head towards a profession I never thought I would cheer on—hero or otherwise. Witemeyer’s decision to make her hero and heroine older than what is usually found in fiction also struck me as exceptional. Not only did the ages enhance the believability of the story, the ages also serve to connect Witemeyer’s characters with readers who are not the typical blonde-haired, blue-eyed beautiful heroes and heroines usually found on the covers of fiction novels.

From endearing children with unique capabilities to wizened and loving secondary characters, the cast of A Worthy Pursuit alone makes this novel worthwhile to read. A strong second to that statement—and one of my favorite aspects of the book—is the characters’ use of faith internally and with each other. Characters in A Worthy Pursuit frequently turn to their faith during times of joy and hardship. In internal dialog to themselves as they pray for peace and understanding, to discussions of God’s goodness when making decisions, Stone and Charlotte in particular demonstrate the daily conversations and prayers all Christians should emphasize in their daily lives.

Christy Award finalist and winner of both the ACFW Carol Award and HOLT Medallion, CBA bestselling author Karen Witemeyer writes Christian historical romance for Bethany House, believing the world needs more happily-ever-afters. She is an avid cross-stitcher and makes her home in Abilene, TX with her husband and three children.